LexView — Whose Children Are They, Anyway?

Talkshow — The Supreme Court didn't agree, neither did our panelists

« In Canada, the state is the first educator of children in matters of faith... It seems.»

MONTREAL, June 13, 2013 /CNW Telbec/ - Loyola High School ("Loyola") wishes to announce that today, the Supreme Court of Canada granted it leave to appeal the December 4, 2012 judgment of the Québec Court of Appeal, which overturned the 2010 Superior Court ruling in its favor, in the case involving the Ministry of Education, Leisure and Sport ("MELS"), regarding the Ethics and Religious Culture program ("ERC").

The decision of the Court of Appeal has, in effect, raised fundamental issues that, in Loyola's estimation, address some of the core values of our Québec and Canadian societies. It is for this reason that the Board of Governors, with the support of the Jesuit Board of Directors, decided to pursue the matter and ask the Supreme Court of Canada to hear the case.

In 2008, the MELS introduced its ERC course. Loyola did not object to the program's goals. "Loyola has long promoted an intelligent respect for, and appreciation of, the world's religions. In fact, at Loyola, 'World Religions' has been offered as a course in itself, or been a major component of a 'Religion' course, since 1975," offer Fr. Robert Brennan S.J., former President and Chaplain and current teacher at the school.

Despite significant reservations about the ERC course's ability to achieve its own, stated goals, it was hoped that it would at least promote some type of religious literacy and allow for a better "dialogue de société". However, as a Catholic, Jesuit high school, Loyola believed that there was a value-added dimension to teaching a course of this nature from a "confessional" perspective. "Teaching another belief system from a confessional perspective − in our instance, a Catholic one − engages belief and when belief is engaged, it gives an account of who we are and what matters to others. This provides the opportunity for life to grow, for society to evolve and for depth and openness to emerge. It creates a fire that kindles other fires," adds Fr. Michael Murray S.J., President of Loyola High School.

The background of the case

Following a procedure provided for by law, Loyola applied for an exemption from the course in March of 2008, asking that the Minister allow the school to teach all of the competencies, content and goals of the program using a structure and methodology that was more in keeping with its Jesuit and Catholic identity. The Minister refused to grant the exemption and informed Loyola that the competencies, content and goals of the program could not be taught according to ministerial expectations in a Catholic (i.e., confessional) context.

As it was unable to engage in a dialogue about the exemption with the Minister, Loyola decided to take the matter to the Quebec Superior Court. From June 8 to 12, 2009, Loyola High School was in court to argue for an exemption. On June 18, 2010, the Superior Court concluded that the decision to refuse Loyola's request was invalid because it assumed that a confessional program could not achieve the goals proposed by the Ministry program. The judgment permitted Loyola to teach its own version of the ERC course. The Minister appealed and in a judgment issued December 4, 2012, the Quebec Court of Appeal overturned the Superior Court's ruling.

The key elements in the debate

Loyola believes that the Minister was wrong to have used the criterion of "confessionality" as the reason for denying the requested exemption and for not recognizing Loyola's program as "equivalent". The Minister's argument that it would be impossible to teach tolerance, good will and good citizenship from a confessional perspective is absurd. Catholic education in general, and Jesuit education in particular, have produced a whole spectrum of intellectually competent individuals who made, and continue to make, a difference in the world.

Further, Loyola contends that the Minister's decision violates Loyola's religious freedom by imposing on the school a pedagogy that is counter to its principles. Paul Donovan, Loyola's Principal, is of the opinion that "… there is, on the Minister's part, the political desire to 'secularize' the public schools to better reflect the multi-cultural reality of our evolving society. But," he asks, "does this mean that confessional, private schools and other institutions, should be 'secularized' as well?"

Finally, Loyola disputes the Minister's contention that religious corporations, such as Loyola, cannot possess freedom of religion at all. Donovan indicates that "… perhaps the most remarkable facet of the case is the fact that the Quebec Attorney General has gone on public record saying that religious corporations, such as Loyola, do not even enjoy freedom of religion." According to this position, only individuals possess freedom of religion, whereas corporations such as Loyola (incorporated as a non-profit entity under the Quebec Companies Act) do not, and the State can restrict their religious practice and belief as much as it wishes. This would mean that the numerous religious groups in the province are entirely at the mercy of the State. "This is completely contrary to Canada's tradition of religious freedom as we understand it," concludes Donovan.

The decision of the Court of Appeal to overturn the initial decision was, to say the least, disappointing for the Loyola High School. After much soul-searching, it was decided to pursue the matter and ask the Supreme Court of Canada to hear the case.

Loyola is an English private school founded and managed by Jesuits. It traces its origins to 1848. Located in Montréal, it is home to 750 boys from Secondary-One to Secondary-Five. Its mission is the formation of mature, responsible Christian adults, in accordance with the traditions of the Catholic Church and the Society of Jesus. 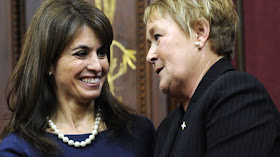 The Supreme Court of Canada will hear Loyola High School

The Supreme Court of Canada will hear an appeal from a Catholic high school that wants to be exempted from teaching Quebec's ethics and religious culture program in a secular fashion.

Jesuit-run Loyola High School wants to be allowed to use its own course and teach it from a Catholic perspective.

The law allows for such an exemption where the alternative course is deemed by the minister of education to be equivalent to the provincial program.

The minister turned down the school's request, but the Superior Court of Quebec sided with the school and allowed the exemption.

The provincial appeal court, however, reversed that decision in a ruling last December.

As usual, the Supreme Court gave no reasons for its decision to hear the case.

Loyola has had a World Religions course for 25 years

Ethics and Religious Culture in Court (on Loyola High's website)

State: Loyola’s teachers have to pretend that the Catholic school was equally open to the idea that Jesus was a complete fraud

Quebec’s position smacks of totalitarianism. The Court of Appeal ruling should not, and hopefully will not stand.

Our Loyola file (in English and French)