Mr. Gilles Routhier, priest, theologian and professor at Université Laval witnesses for the government and the imposition of the Ethics and Religious Culture course.

Mr. Routhier, fervent adept of the conditional, as well as overlapping distinctions, first attempted to show that the Catholic doctrine allowed the ERC course, and that the Catholic bishops were favourable towards the course.

Me Bélisle, one of the lawyers for the Lavallée parents, after having read the bishops’ communiqué dated March 17, 2008, succeeded in having the theologian admit that the Québec bishops had multiple reservations with regards to the implementation of the ERC course that they had not wanted in the first place:

« The government’s decision with regards to the program having already been taken, the Council of Catholic Bishops of Québec can only give its opinion on the subject.

This program raises some preoccupying questions : for example, in the area of ethics, there are few significant indicators other than those that discuss harmonious social relations; the sociocultural approach to the religious phenomenon could lead to a reduced vision of the experience of a believer; it is not possible to predict the effect of being exposed to such a diversity of views, especially for children in elementary school.

The bishops state that it is difficult to answer these questions in the abstract. Experience will be the judge of whether or not the advantages of the program outweigh its limits, and if its application will be coherent with the good intentions that are stated.”

Mr. Routhier was still trying to pull a few tricks when the tables were turned. In light of his insistence in trying to interpret texts from the magisterium to say that they allowed the imposition of the government ERC course, Me Bélisle produced an official document from the Congregation for Catholic Education that would contradict Mr. Routhier’s interpretation. Surprised by this new document addressed to Catholic bishops worldwide and abundantly quoting texts from the magisterium, Mr. Routhier was left speechless as he feverishly read through this new document. Finally, the court allowed the theologian to interrupt his cross-examination. Friday, after much time to think things through, Mr. Routhier’s cross-examination will be brought to a close. 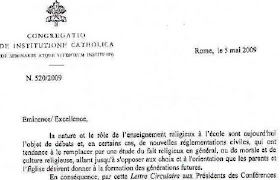 Access to document from the Congregation for Catholic Education (PDF, 7 pages)

Confusion during cross-examination of Mr. Jacques Pettigrew, responsible for ERC course at the Monopoly of Education.

During interrogation on April 27, 2009, before appearing in court before the judge, here is what Mr. Jacques Pettigrew had affirmed regarding his professional activities:

Question from Me Bélisle — Therefore from seventy-six (76) to two thousand and nine (2009), up until now approximately, did you hold any professional activities other than that of teaching in the private sector or in the public sector of education, or any other related activities?

Reply from Jacques Pettigrew — From seventy-six (76), therefore after my entrance into university, as I mentioned a while ago, two (2) years in a (youth?) center as an educator. I also took a year off without pay during the eighteen (18) years I taught, that is nine (9) months of leave without pay to go to Nicaragua as an international volunteer.

Q — But never any other professional activity other than what you have just described?

Q — Neither as a consultant…

However, it is now apparent that Mr. Jacques Pettigrew has hidden from the court that he had other professional activities related to the future implementation of the ERC course while he was actually participating in its elaboration.

Mr. Pettigrew, who recently made an extensive trip to India to study Hinduism, actually offered his paid services as a guide during organized tours of temples, pagodas, mosques, vegetarian restaurants and Krishna devotees' places of worship.

The production of the documents below had the effect of a cold shower in the court room; Mr. Jacques Pettigrew looking towards his lawyers as if requesting their assistance, or was it to implore forgiveness in light of this embarrassing oversight? Mr. Pettigrew was also surprised that the parents’ lawyers had found this information, since he had not renewed the domain name of his business and he thought this information had disappeared on the Internet. 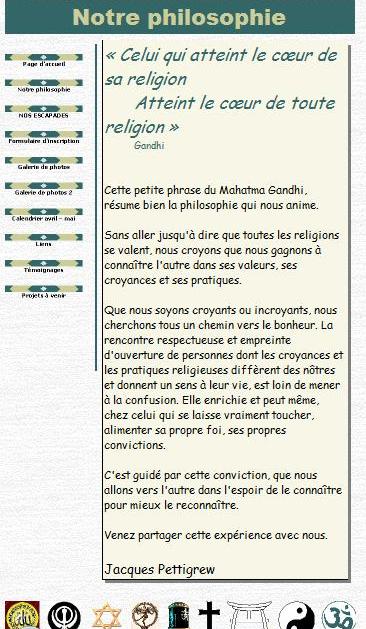 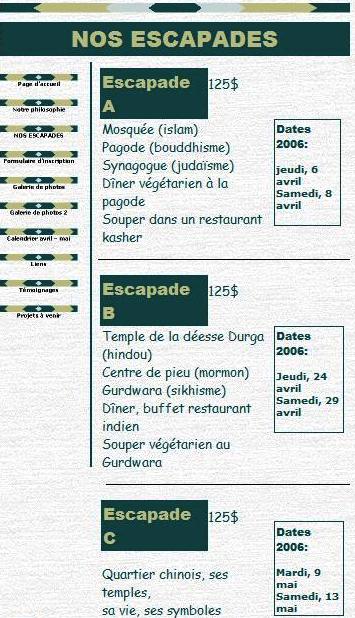 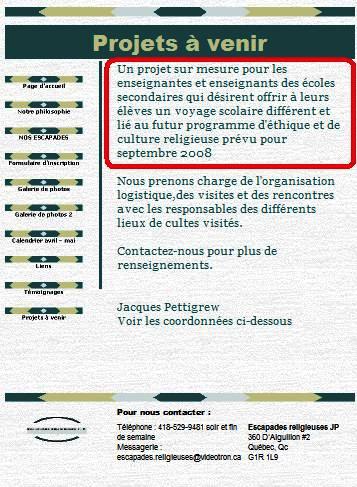 The day starts with Mr. David Mascré’s testimony by videoconference from Paris.

His testimony eloquently reinforced the parents’ position, supported by their four main grievances: the ERC course imposes a polytheist vision of the religious phenomenon, is relativist, dissociates ethics from morals, and claims neutrality with regards to ethics, while interfering in the capacity of parents to pass on their faith to their child.

For the President of the Coalition pour la liberté en éducation, Mrs. Marie-Josée Croteau, this supports what parents have expressed. “We had all sensed this before hand. Therefore, it is very encouraging and interesting to see that even university experts come to say: « Today, we tell you that you, the parents, have reason to be concerned about this course.” There are good things in the course. But there are also some things that may […] have consequences on the children, on the upcoming generation, and caution is necessary in such a situation”, declared Marie-Josée Croteau.

Carried away by David Mascré’s brilliant oral defense, many parents in the courthouse applauded, something unusual in a court room.

Me Boucher’s cross-examination resembled a simple text analysis where the lawyer underlined the affirmative vocabulary and confident tone of Mr. Mascré’s expertise. These attacks seemed quite weak; they never actually addressed Mr. Mascré’s fundamental arguments, apart from Me Boucher trying to get Mr. Mascré to admit that he was going a bit too far by saying that certain beliefs were eccentric or illegitimate. Mr. Mascré did not make a concession on this point.

The philosopher from Saguenay also intervened by videoconference but this time from Harvard University in the US.

The rest of the day (two hours) was spent listening to the person responsible for the ERC program at the Monopoly of education, as he put us all to sleep reading through the program. There’s good pedagogue for you! To think that people like him decide what is to be taught to our children, even in so-called private schools!. At the end of the day, the room had dozed off and was half empty. During these two hours, Mr. Pettigrew did all he could to present the program as something inoffensive in spite of what is really going on in class or what is actually allowed by the program.

We were briefly brought out from our torpor when the judge asked him to explain why in the grade one textbook the Annunciation was romanticized (Mary blinded, under trees, hesitant, renting a “cradle” in the textbook rather than a stable), as the mother, Mrs. Lavallée, had mentioned the first day of the trial? Who approved these textbooks? Mr. Pettigrew found that this was just editorial license.


Pages in question (in French).

We are impatiently waiting for the cross-examination to show that Mr. Pettigrew has obviously sweetened the pill.

Trial's Quote of the Day

Mr. David Mascré holds a Ph.D. in Philosophy and another Ph.D. in Mathematics, and teaches at the Paris V University.