Court will decide if Quebec allows a choice in religious education

Extracts from an article by Barbara Kay of the National Post.

According to its inventors, the ERC curricula are designed to sensitize students to the tenets of Quebec’s rich array of religious beliefs – the major religions, plus native myths and even Wiccan beliefs – in order to “facilitate the spiritual development of students so as to promote self-fulfillment.” To parents who take their religion seriously, it is not the state’s job to facilitate anything of the kind; it is their job.

And so, representing the cadre of some 2,000 Quebec parents who wish to have their children exempted from the ERC program, which does not allow for exemptions (not even for the home-schooled), a Drummondville couple, who cannot be named, have taken their case to the Supreme Court.

In their factum, the lawyers pose the question: “Can the state impose, without the possibility of an exemption, a program of study about religion and ethics on parents who view it as infringing on their religious beliefs and their freedom of conscience? Such is the stake in this case.”

The ERC curriculum was adopted without public consultation. Its mission is to instil “normative pluralism” in students. In simpler terms, normative pluralism is moral relativism, the notion that there is no single truth, and that all religions are of equal merit and equal worthiness of admiration. The program is predicated on the philosopher Hegel’s “pedagogy of conflict” model. As Fernand Ouellet, an ERC founder noted, students “must learn to shake up a too solid identity”; they must experience “divergence and dissonance.” How?

Even if one conceded that the study of all religions is a good thing, the ERC program is highly disingenuous in that only positive elements of every religion are permitted for “le questionnement.” Encouraging critical thinking is not part of the ERC program. Two values dominate the courses: “vivre ensemble” (live together) and arriving at the “bien commun” (common good). Social harmony is to be achieved by constant dialogue and “recognition” of other cultures, which are to be accomplished, in the words of ECR mandarin Georges Leroux, by inculcating in children “absolute respect for every religious position.”

Thus, children are taught, for example, that witches “are women like any other in daily life.” And “Technologically [the Raelians] are 25,000 years in advance of us.” And, considering that only 700 of Quebec’s aboriginals identify themselves with aboriginal spirituality (the vast majority of ethnic aboriginals are Christian), aboriginal myths are accorded absurdly disproportionate reverence.

But all of this is precisely what religious parents do not want their children exposed to in their tender years. They do not want their children to learn that Christianity and pagan Animism and tinfoil-hat science fiction are equally true and equally conducive to a life of morality and spiritual vigour. Aside from a violation of parents’ rights to morally instruct their children, such a critically vacuous prescription is an insult to the intelligence, equally offensive to the religious and atheists alike.

Ethnic Studies Phd candidate Joelle Quérin produced a study in 2009 for the Institut de Recherche sur le Québec. After a deep analysis of the course’s stated objectives, content, teachers’ role and suggested classroom activities. Quérin stated: “I wanted to verify if the course gives knowledge to children or if it indoctrinates them. I observed that it was the second alternative that prevailed.”

Quérin cites, for example, an instance where students were invited to redesign the Quebec flag, replacing the cross with a more “inclusive” symbol, and another student activity entitled “Youpi! Ma religion à moi!” (my own religion!), in which religions invented by students are accorded the same deference as real ones. Such subversive pedagogical impulses are a mockery of Quebec’s heritage culture.

Quérin also notes that the vaunted “dialogue” of the program consists only of politically correct scripts that must be followed without divergence. An editing team spokesman told Quérin that if a student poses a question that does not conform to the “recognition” mantra that all beliefs are equal and good, the teacher must intervene to stop the discussion.

Quérin concludes: “After having followed the ERC course for ten years, the students won’t have a great knowledge of religions, but one thing is sure: no [cultural] accommodation will seem unreasonable to them.”

The ERC course is not benign. Disguised as diversity positivism, it is in fact a strategic subversion of parents’ rightful authority over their children’s moral instruction. It will also serve to undermine Quebec children’s natural pride in their own patrimony. And worst of all, it will serve to suppress students’ ability to think critically about different religions and cultures without guilt. A 2008 Léger marketing poll found that 76% of Quebecers prefer a choice in religious education. Let us hope that the Supreme Court agrees with them. 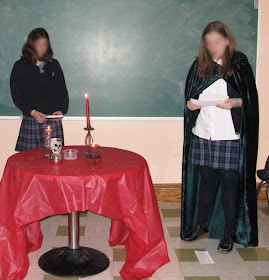