Just before Christmas, Family Minister Yolande James announced regulations that would seek to ban religion instruction from daycare centres that take government money. Given that four-year-olds are unlikely to be studying theology, the Quebec government is out to stamp out religious expressions — prayers, songs, bible stories, manger scenes and even explanations for religious dietary practices. 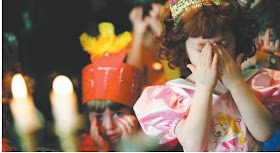 Strangely, you can have a manger scene — you just can’t tell the children who the figures are. The scene is cultural, but Jesus is religious. In a Jewish or Muslim daycare, presumably the children could keep dietary laws but not be told why. Children could decorate a Christmas tree (cultural) but not sing Silent Night (religious). It’s easy to mock the silliness of Quebec society when it comes to religion — the nanny-state cracks down on the nurseries! — but violations of religious liberty are no laughing matter. Quebec’s antipathy to expressions of Jewish and Islamic faith, combined with a deep self-loathing of its Catholic heritage, makes for a toxic combination.

That’s almost right. It’s secular fundamentalism that the Quebec government practises, touched by a totalitarian impulse that brooks no dissent, even from little children who might need help in colouring their religious pictures.

Our editorial board argued on Tuesday that Quebec’s massive subsidies for approved daycare spaces has effectively crowded out non-subsidized daycare. The economic argument is clear — subsidize one form of child care over all others, and soon there will effectively be just one form of child care. Daycare has been de facto nationalized in Quebec, and the national religion of intolerant secularism will now be imposed.

The cultural question is more troubling. So serious is Quebec’s government about imposing its view on all children that, concurrent with the new regulations, it will triple the number of inspectors to enforce them. Quebec will soon have 58 inquisitors dropping in on daycares to ensure compliance. One can only imagine the scene when the inquisition arrives, sifting through the sandbox in search of clandestine religious items. And who will write the code for the bureaucrats, ensuring that miscreant daycare workers don’t mention that la fête nationale was once upon a time Saint-Jean-Baptiste?

There is an economic cost to big government. There is also a cultural cost, if everywhere government goes alternative values and viewpoints must retreat. If government goes everywhere, including the care of babies, then not even babies are entitled to hear views that dissent from government dogma. Quebec has long since abandoned the neutral state in favour of the aggressively secular state. Where the Quebec state goes, religion must retreat, and there is no limit on where the Quebec state will go.

Totalitarian states have always sought to control the kindergartens and the schools and the youth groups, all the better to ensure that the influence of parents on their own children is attenuated. There is the hard totalitarianism that comes by force of arms. Soft totalitarianism comes by way of subsidies, where first the family is embraced by the state, and only then is it suffocated.

The educational world in Quebec does not leave much room to breathe. On religious and cultural matters, the consensus position, as defined by the curriculum apparatchiks, must be taught without exception in all public schools, private schools and even at home. Until now, the preschoolers had escaped the stifling grasp of government. No longer.

As our editorial pointed out, the actual educational results of Quebec daycare are poor. Quebec’s nationalized daycares don’t teach little Quebeckers very much. Now they will ensure that the youngsters know even less.